Q&A with the winner of the Concordia Tournament! – Acram Digital 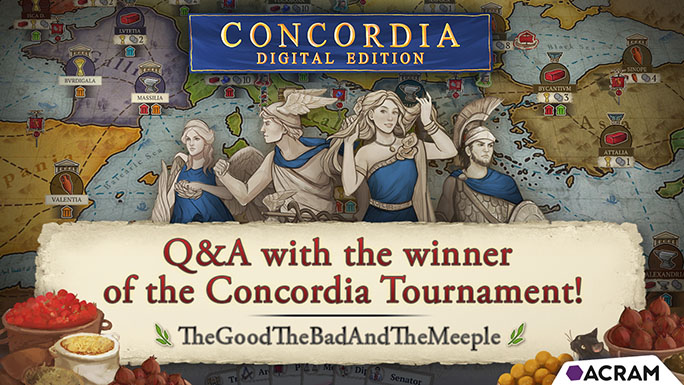 We just ended the Concordia: Digital Edition Tournament! It was a long and hard fight ( If you’d like to know more about the Final Round then please make sure to read Final Round Report by Popasticboy – the 2nd finalist. ) but from 63 contenders one emerged victorious! TheGoodTheBadAndTheMeeple – winner of our tournament has answered some questions for you.

If you’re interested in a tournament or just wanna talk about Concordia – visit our Discord channel. 🙂

1. What can you tell us about yourself? When was the first time you played Concordia?

Hey, Fabien speaking, I am a french quite old to the boardgame hobby (15+ years) to have met Mac Gerdts and NOT played Concordia at Essen Spiel 13 (It was so crowded that we passed… shame on me!) Hopefully, my friends came back from Spiel with 3 boxes of the game and I played it a few months later for the first time. It was a instant love, for its simplicity, its strategy and its strong indirect interaction. The games growed in my top while playing it, and while playing a ton of other great and not so great games.

Concordia became my all time favorite about 6 to 7 years ago when the hobby grew with a ton of super complex yet poorly strategic designs (IMHO). Concordia shares that Top 3 with 2 other incredible clean designs, Great Western Trail, and Keyflower.

2. Which game of the tournament was the most difficult in your opinion?

I must admit I previously played the game online a lot during pandemic with a group of top players which helps me build a good knowledge base of the various strategy, playing in most configurations. Especially opening and closing that are crucial in this game.
Without any doubt, the toughest game was the semi-final. Winning a 5p game with experienced players is extremely hard, and somehow hard to drive since everything could happen out of your putting you short of a move for the end game, or giving you some good opportunities on the other hand. I did my best and found myself very lucky to win by a single point 91 90 90 90 (58) Is that the craziest win I ever made?

In this game I played the game to be as adaptative as possible. Being early ready to grab cards and try to spread on a variety of regions/goods to get a good amount of points and be regularly with large amount of ressources to react to opponents moves efficiently. It paid, I triggered the end game and preyed no one could make it better than I thought!

3. Tell us about the finals. Do you have any thoughts on what could you do better / differently in this game?

The final was another game, 2p being very controllable in which you can predict efficiently your opponent moves and try to counter/take advantage of it!
Let’s analyze… Large map, salt accessible, cloth also.

We played with Forum. He got the powerful +1 move forum, which I prefer in 4-5p player game in which maps are crowded.
I picked the 1 discount on any city construction. Which allowed to make a perfect 1st turn architect with few coins and a lot of materials for future turns.

However, I was not prepared to my opponent’s strategy. He early bought far more cards than I did. Obviously, I was better on houses, by cards are counted, houses rarely. The number of cards was worrying me, however, I knew I got more paying cards (all 10 points mercators) Will it be enough? Should I persist and close the game at house number? a usually very hard task i was unable to do since I did not invested in food and steel.

I was feeling I was doing more efficient turns than my opponent, but he made that 4 colonists turn which drove me mad for the end game. I HAD to finish quickly, instead he will be able to build everywhere with his 7 moves. That was not easy, since the last 2 cards, vine and steel specialists were under optimistic for me, and my opponent too.

So I switched to a 2 more turns end, to the houses thanks to a very important second architect I bought mid-game. Hoping my opponent will not make it to enough money and resources to build that many houses! Such option is always perilous. Took me 2 more low turns to prepare the end.

If I would have played differently, I would have bought a colonist just for the safety break of his strategy. It was on my todo list… but not that high 🙂

4. Did you enjoy the tournament? Are you going to sign up for the next?

Yes it was a lot of fun! For sure the next one, I’ll be in. You have to be prepared for some time, as playing remotely 5p games could be long and sometimes lose of focus on the strategy you elaborate 3 days ago. 🙂

5. Did you hear about Unmatched: Digital Edition? Let me tell you a secret – this will be the next Acram’s Tournament. Can we count you in? 🙂

Oh yeah I heard about the game (and its many versions ahah!) and its digital implementation thanks to the great Acram discord channel. I never got the chance to play the game, so I will be happy to join the tournament as a fresh player this time with no big expectations but discovering it.

6. Is there anything else you would like to say?

I would like to thank Acram for the organization of this fun tournament to continue to show some love to this insane design which is Concordia that any gamer should have played in his life.
Thank you Mac Gerdts for making Concordia, and Salsa, and Venus and Solitaria!