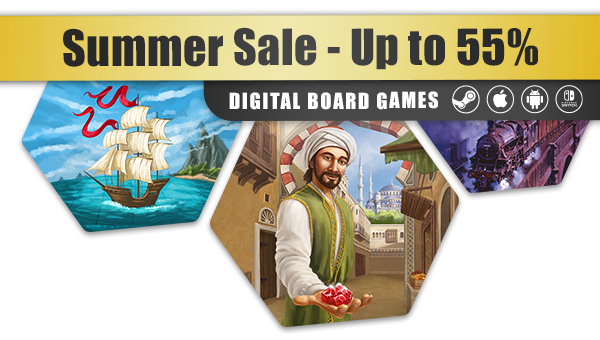 Ladies and gentlemen, nerds and nerdettes, Digital Boardgames Summer Sale is here!
In the period of 25.06 to 09.07 all our games, including DLCs, are on sale on all platforms! Up to 55% off!

Just look at some of the discounts!

Istanbul: Digital Edition on Nintendo Switch – 40% off
Steam: Rails to Riches on iOS – 40% off
Eight-Minute Empire Emperor Edition (all the DLC maps) – 55% off!

And those are just three examples! Almost everything in our offer is at least 40% cheaper between June 25th and July 9th.


The full rundown of the discounts is as follows:

Concordia is now available in the Japanese language!